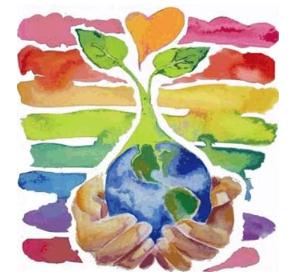 The Pope’s revolutionary Encyclical a constructs a language for cultural and structural changes to forge paths toward sustainability. He condemns short-sighted economic and political forces that have made our planet “look more and more like an immense pile of filth,” (par 21). And, among his most urgent calls to action, he insists, “We need to strengthen the conviction that we are one single human family. There are no frontiers or barriers, political or social, behind which we can hide, still less is there room for the globalization of indifference,” (par 53). His work calls on each one of us to identify and reject systems that tacitly or explicitly accept abject poverty and environmental degradation as necessary and unavoidable byproducts of progress and growth. He has captured the attention of activists and concerned citizens around the world who may have lost faith in Catholicism’s capacity to offer significant value to critical global issues.

Social decline is intimately intertwined and related to ecological collapse. “…We have to realize that a true ecological approach always becomes a social approach; it must integrate questions of justice in debates on the environment, so as to hear both the cry of the earth and the cry of the poor,” (par 49). While he may advocate for land preservation (par 37) that is based on the contested concept of ‘virgin’ forests (do such things exist and are they of greater value than managed forests?) and would restrict human access to globally important ecosystems, it otherwise appears that the Pope’s observations and suggestions for change are broadly applicable and could resonate with members of developed countries. He recognizes that developed countries must prioritize the needs of the poor and that solely consumerist values produce much of the world’s maladies – from inequality to pollution to climate change. “Humanity is called to recognize the need for changes of lifestyle, production and consumption, in order to combat (global warming) or at least the human causes which produce or aggravate it,” (par 23).

Pope Francis elegantly makes the case for including all forms of wisdom and knowledge in the pursuit of solutions to global problems. “If we are truly concerned to develop an ecology capable of remedying the damage we have done, no branch of the sciences and no form of wisdom can be left out, and that includes religion and the language particular to it.” (par 63). We cannot deny the power of cultural predispositions and the role our worldviews play in our approaches to urgent global dilemmas. Our world is one, complete whole. And Pope Francis, in this historic Encyclical, beseeches all members of the human family to start acting like it.

As a PhD student at American University's School of Communication I am working on interdisciplinary research projects that range from copyright and access to knowledge to complicating global climate models with dynamic sociopolitical variables. View all posts by maggieclifford